The Rev. Dr. King’s ideals and teachings are desperately needed in our society like never before. However, many people in the US do not really want change in the way Dr. King advocated. He would not have subscribed to the passive version of so called racial harmony that is espoused today in the media and the public sphere. He would not have signed on to a call for unity that does not name and challenge the systemic and institutional racism that is still entrenched in America; a deep seated racism that persists even over fifty years after King’s death. Likewise people today would have been uncomfortable with Dr. King’s proposed Poor People’s Campaign that calls for economic justice and equality, even going beyond conversations about racial equality. King was assassinated the same year he organized the Poor People’s Campaign march, Ralph David Abernathy had to carry out the march, as a result of King’s death. To further highlight the complexity of King’s work it is fitting to repost an article we did a few years ago. 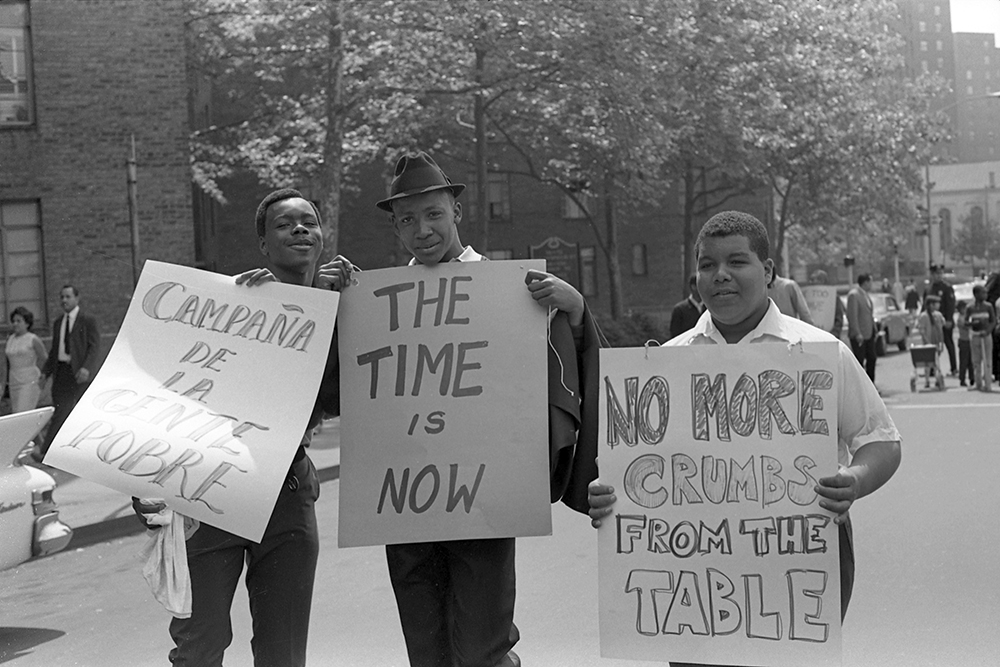 On the Lower East Side, three young men carry posters as they walk along Madison Street (past Gouverneur St) during the Poor People’s Campaign 1968 march, New York, New York, May 11, 1968. (Photo by Bev Grant/Getty Images)

Introduction
With the celebration of the Rev. Dr. Martin Luther King’s life and work it is a good time to take a deeper look at his legacy. The celebrations of Martin Luther King usually consist of an emphasis on his most popular speeches, his marches and also his death. Although, popular tributes to King are of the utmost importance, they fail to take an in-depth analysis of his more complex and sophisticated ideas. When one delves deep into the works of Dr. Martin Luther King, one discovers that he talked a lot about many democratic principles such as justice, freedom, equality, fairness and creating what he called the “beloved community.” These principles can apply to societal challenges today. This article offers resources that can help students, the general public, teachers and scholars take a more in-depth look at Dr. Martin Luther King, Jr. It provides some information and resources outside of mainstream portrayals of Dr. King that may be useful tools in addressing some of the social and political challenges in which we find ourselves today.

King Was Not Always Popular
Dr. King was vilified, harassed and eventually murdered because his ideas challenged the status quo and the established order. Ironically, many people that celebrate Dr. King in our time would not have supported him when he was living and would have considered him to be a radical. Martin was a man of great integrity, who was very kind and selfless as well. However, his unpopularity came because he courageously spoke out and pushed against the establishment. Stephen and Paul Kendrick in an April 3, 2018 Washington Post Op Ed article wrote “In our long effort to moderate King, to make him safe, we have forgotten how unpopular he had become by 1968. In his last years, King was harassed, dismissed and often saddened. These years after Selma are often dealt with in a narrative rush toward martyrdom, highlighting his weariness. But what is missed is his resilience under despair. It was when his plans faltered under duress that something essential emerged. The final period of King’s life may be exactly what we need to recall, bringing lessons from that time of turmoil to our time of disillusion.” Right up unto the day that he died, King had many critics, but after he was killed people celebrated and praised him. Perhaps this is because many people are not always willing to make sacrifices, but when the time comes for accolades there are no shortage of supporters.

Dr. King’s “Letter from a Birmingham Jail” Addresses Some of His Critics
Dr. King’s letter from the Birmingham Jail is a good source too add to the discussion about the many critics he had. Martin chose to go into the ministry after first considering being a medical doctor or lawyer. In his writings, he states that the church and his role as a minister gave him the best resources and platform to answer “an inner urge to serve humanity.” Thus, the opinions of his fellow ministers (He directs the letter to his “fellow clergymen”) was very important to him. Apparently in King’s day many of the ministers were very critical of the work he had been doing. He starts off stating “while confined here in the Birmingham city jail, I came across your recent statement calling my present activities unwise and untimely.” He goes on to say that “If I sought to answer all the criticisms that cross my desk, my secretaries would have little time for anything other than such correspondence in the course of the day, and I would have no time for constructive work. But since I feel that you are men of genuine good will and that your criticisms are sincerely set forth, I want to try to answer your statement in what I hope will be patient and reasonable terms.” As evident in this quote, one can clearly note that Dr. Martin Luther King Jr. was not always viewed as the kindly, soft, superhero in which society views him today. As the letter also indicates, some of the disapproval came from his colleagues in the ministry. To be fair, Martin enjoyed immense popularity among many people, but he had just as many enemies as he had admirers, if not more.
Letter from Birmingham Jail 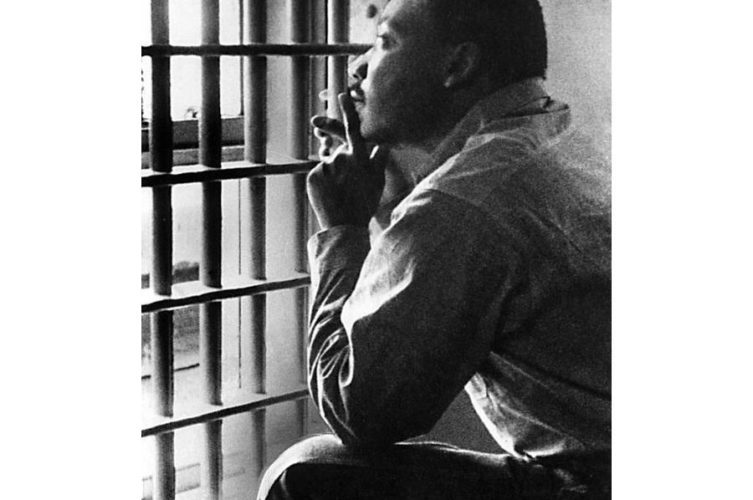 King’s Non-Violence Stance Was Not Always so Certain
One of the principles King is most noted for is his practice of nonviolent resistance. However, it is not common knowledge that he did not start out this way early in his work. But, through much of the literature he read and those who mentored him he moved in that direction. His advisers showed him an alternative to violence and how nonviolent resistance can act as a powerful tool. The goal was not to humiliate one’s opponent but to win them over as a friend. He took to the idea also because of his religious beliefs as a Christian and a Baptist minister. Two of King’s primary advisers were Christian theologian Howard Thurman and white activists Harris Wofford, from the Christian pacifist tradition. Another one of King’s key mentors was veteran African-American civil rights activist Bayard Rustin, who helped coach and train him in strategies of non-violent resistance. Both Wofford and Rustin both studied Gandhi’s teachings and exposed King to his philosophies. In King’s early activism in the 1950’s he rarely used the term “nonviolence” and knew very little about Gandhi’s work. Surprisingly, King did not always subscribe to nonviolence and early on believed in self-defense. King had even purchased firearms to protect his family from attackers in his home. Later in his activism he strongly and publicly denounced the personal use of guns, however Dr. King always had  conflicted views of self-defense. Even though he spoke out against self-defense, many of his associates carried fire arms to protect him. So perhaps he was influenced by the realities of his day and black activist who unapologetically advocated for the use of violence if necessary.
Dr. King’s Nonviolence Stance

Discussion Questions:
• What progress has been made in terms of racial reconciliation sense Dr. Martin Luther King Jr.’s time?
• How much progress have we really made in terms of race relations and equality since the Civil Rights era?
• Are there incidents, events or attitudes in today’s society that remind us of the times in which Dr. King lived? If so, what are they?
• Dr. Martin Luther King Jr. talked a good deal about race, but he also talked about economic injustice, do you think we have made much progress in terms of economic equality?
• If Martin were living today how would he feel about society? What kinds of things might he be saying?
Below are a number of lesson plans and resources for teachers and students that offer a more in-depth study of the life and work of Dr. Martin Luther King, Jr.