We will continue our series highlighting the voices of young diverse authors. Our next piece is an essay by Niandra Dennis celebrating the beauty and diversity of Black hair. Niandra is a senior at Northern Kentucky University, majoring in nursing. She works in the healthcare industry in Kentucky.

In 2006, singer India Arie released the song “I am not my hair” a soulful song which, described different types of hair and some of the effects that it had on little Black girls. It quickly became a song that empowered some Black women to find confidence in their hair, and its natural form. A Black woman’s hair is in many aspects the crown that she wears. It is a representation of self. It allows a woman to be different, to stand out, make a statement. Black women’s hair is unique. Just as the beautiful brown skin comes in different shades, the hair comes in a wonderful variety of textures. It comes in loose curls, tight curls, hair that defies gravity, hair that lays flat, or hair that can twist and lock. A Black woman’s hair is the definition of diversity. We are not our hair, but our hair is who we are. 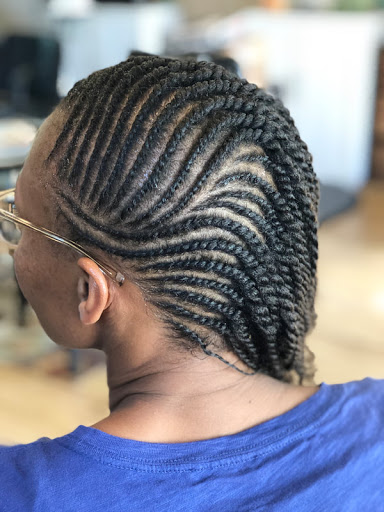 Natural hair, or hair that has not been chemically altered is on the rise. Young Black women of the twenty-first century now wear their hair in the same way their mothers and grandmothers did in the 1960’s. It is not uncommon to see a young Black girl with an afro, or a puffed out natural ponytail. Hair culture has changed from Black women wearing straight permed hair to women sporting the hair texture they were born with. In some cases, Black women with permed or processed hair are now the minority. While permed hair is not looked at as taboo, it is no longer the popular choice. Black women have found a way to have the best of both worlds. On Monday, a Black woman may wear her natural afro or braids to work or school, and on Friday straighten it out with a flat iron. Black women have taken the derogatory word “nappy hair” and changed the narrative to “kinky”, or “tight curls.” The term “dreadlocks” was also changed to just “locks,” as there is nothing dreadful about the hair of black people.

In 2016, Butler Traditional High School in Louisville, Kentucky came under fire when the dress code stated that locks, twists, and hair jewelry was inappropriate and against the school dress code. The dress code stated that “students coming to school with these hairstyles wouldn’t be allowed into classrooms until their attire is corrected… We feel that a student’s academic success is directly correlated to appropriate attire and appearance.” (Kentucky High School to Change Racist Hair Policy, 2016). The policy at Butler Traditional quickly caused outrage in the community of Louisville, with many people taking to social media in disgust. The term used by protesters was “natural hair discrimination”, as the policy targeted African American natural hair styles. Through media attention and parental support, the policy was changed to be more culturally friendly toward Black students and their hair. One can ask many questions related to school policy. What exactly is appropriate? Straight managed hair? Hair that is represented on television? Traditional public schools often have strict uniform policies. However, hindering Black students from receiving an education as a result of wearing their hair in its natural state is absolutely absurd. After all that has been fought for –freedom, women’s rights, the right to vote– who would think that a school in an urban area would have such a racist policy. High school students had to fight for their right to confidently wear hair styles that made them feel empowered.

People who are threatened by the natural state of our hair must understand that a Black woman’s hair is her crown. We have self-made crowns that defy gravity and reach toward the sky; crowns that allow African American women to be the queens they are destined to be. We will not be sorry that our crown bothers you. Our hair is who we are. It is who we will be.