We want to continue our tradition of highlighting cultural diversity in holiday traditions. We must continue to find ways to expand and diversify our understanding of American history and culture. One practice we would like to highlight is the Watch Night Service tradition in the Black community that takes place on New Year’s Eve. 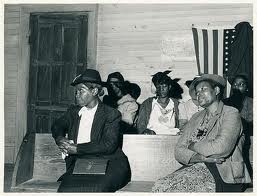 Watch Night Services as Historic Black Religious Tradition
African Americans have a strong tradition of New Year’s Eve watch night services that is heavily rooted in black cultural history, dating back to the American Civil War. On December 31, 1862, late in the evening enslaved and free African Americans gathered in their homes and churches, to “watch” and ring in the new year, awaiting news that the Emancipation Proclamation had legally taken effect. On September 22, 1862, President Abraham Lincoln issued an executive order that freed enslaved people in the states rebelling against the union. But the legislation would not take effect until midnight January 1, 1863. On that night African Americans across the country watched and waited for the news of freedom, this established the historic Black Watch Night Service (Also called Freedom’s Eve) that is still widely practiced in contemporary times. Today, Watch Night is an annual New Year’s Eve tradition that includes the memory of slavery and freedom, reflections on faith, and celebration of community and strength.

Where are all of the Workers? The Great Resignation Explained

Combating Misinformation by Teaching about the Coronavirus in K-12 Classrooms