Introduction
Confused about what is going on with the war in Ukraine? Here are five things that will give you a better idea of how things are unfolding. We are also including extensive resources for teaching and learning about the war in Ukraine. This information comes primarily from the University of Colorado Boulder’s online news site CU Boulder Today  from an article entitled 5 things you need to know about the Russia-Ukraine war. Please read a republishing of the five items outlined by the University of Colorado, coupled with the resources and lessons listed at the end of this article to get a more in depth understanding of the conflict. 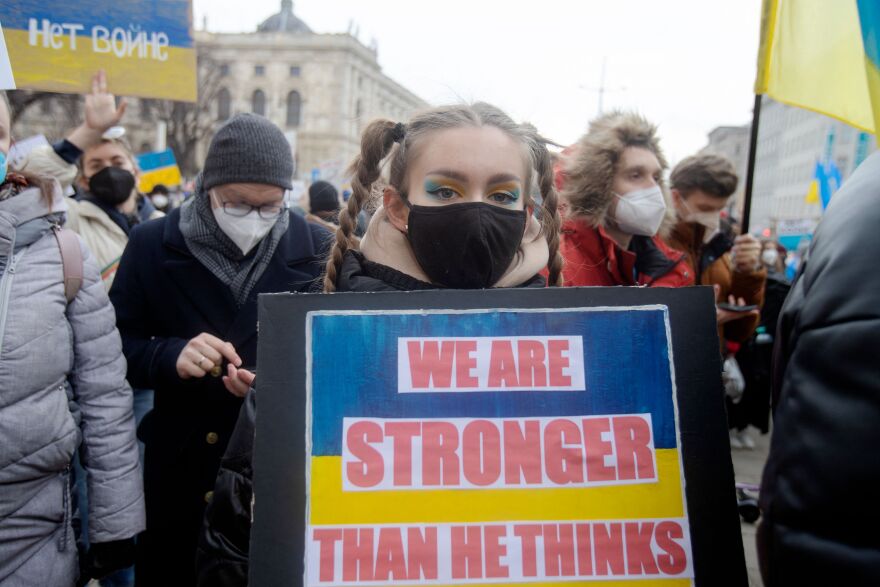 A woman holds a sign reading “We are stronger than he thinks”
during Saturday’s demonstration in Vienna against the Russian
invasion of Ukraine. Alex Halada/AFP Via Getty Images

“Putin’s motives are unclear, but it’s unlikely he’ll back down
Russia’s decision to invade Ukraine befuddled Russia experts because it didn’t make strategic sense, Hutchinson said. Erin Hutchinson Erin Hutchinson “Even Russia-based Russia experts were confused because it doesn’t seem like a good strategic decision,” she said. “We don’t understand what is going on in Putin’s head right now.” Russian President Vladimir Putin has made many claims justifying the invasion: that Ukraine was committing genocide against Russians; that Ukraine is not an independent nation but rather a part of Russia; that the invasion was an “act of self-defense” against the expansion of the North Atlantic Treaty Organization (NATO). “Putin is really reviving these old Imperial myths that there’s no such thing as a Ukrainian nation and it’s all just one big Russian nation,” Hutchinson said. What does seem to be the case is that Russians are ramping up attacks against civilians—they’re moving toward a strategy like Chechnya. It does not appear that Putin has any intention of backing down.

The unintended outcome: Europe, Ukraine comes together
The invasion has also had an unintended effect: Instead of creating divisions within Ukraine and among European countries, people and nations have actually come together, the panelists said. John O’Loughlin John O’Loughlin O’Loughlin pointed out that the Russian government believed Ukraine would easily submit to a Russian invasion, noting the Ukrainian people have faced significant economic hardship—a recent survey showed 44% of Ukrainians could not afford their utility bills. It’s clear Putin didn’t expect a large Ukrainian resistance. “[Putin’s] long-term strategy is clearly not going to work given the opposition in Ukraine and the outside support,” O’Loughlin said. Rather than weakening NATO as Putin may have intended, the invasion could wind up giving that alliance new relevancy. “It’s really hard to see, without NATO disbanding, how Putin would not have used [NATO] as some sort of Western Boogeyman that had to be defeated,” Sohkey said. “What Putin may have accomplished very unintentionally is unifying Europe and getting more European countries into NATO,” she said. Six European Union nations—Austria, Cyprus, Finland, Ireland, Malta and Sweden—are not NATO members. 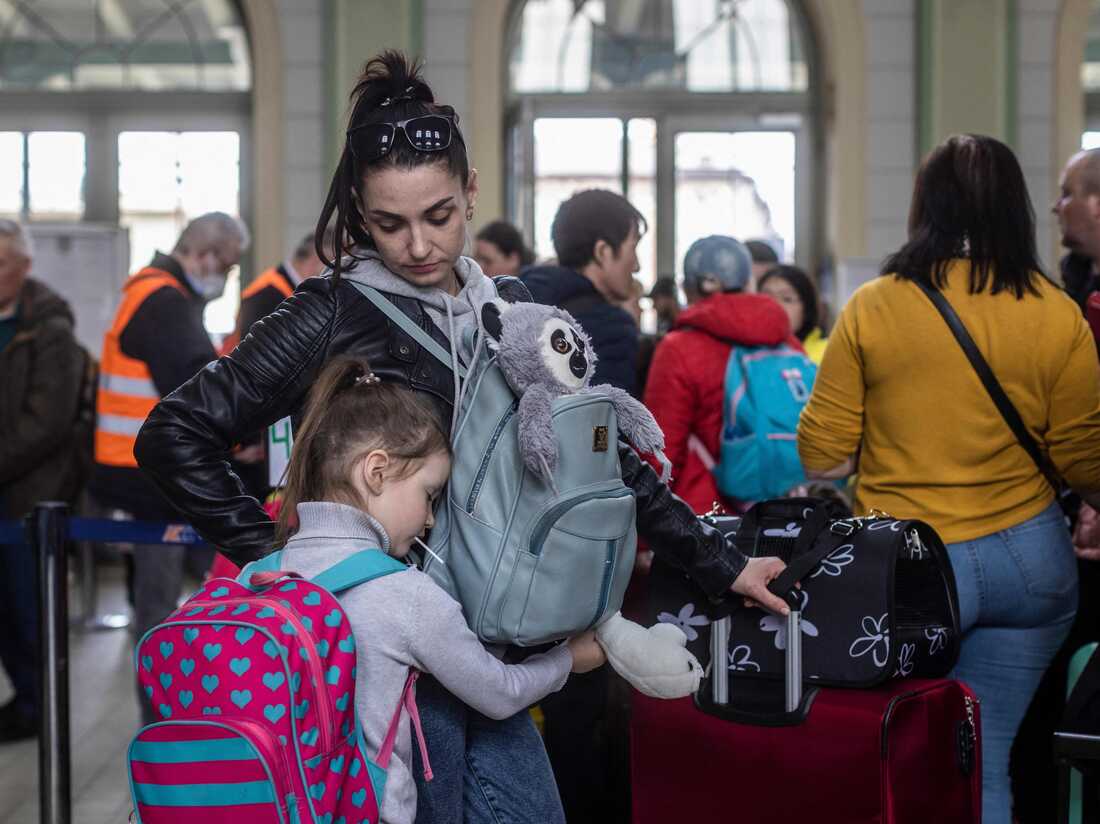 A woman and a child, along with other refugees from Ukraine,
wait in the ticket hall of the railway station in Przemysl in eastern
Poland.Wojtek Radwanski/AFP via Getty Images

Most Russians didn’t want this to happen
In December 2021, reliable survey data out of Russia showed only 8% of Russians thought the country should send military forces to fight the Ukrainian government, and only 6% thought Russia should approach the West as an enemy. Even so, 75% still believed NATO was a risk to Russia. “The data shows Russians didn’t think the West should be viewed as an enemy, but they did see some basis to the foreign policy that Putin was likely pursuing,” Sohkey said. Since the invasion began, protests have occurred around Russia. Sohkey said the Russian government is clearly worried about protests since it has deployed riot police to break up those events. “The most recent estimates I’ve seen is that maybe closer to 6,000 people have been arrested in protest and at least 51 cities, including Moscow and St. Petersburg, have had anti-war protests,” Sohkey said. Additionally, the protests now are less about Soviet legacy and more about loss of life in Ukraine, and that Russia is cut off from the world as a result of the recent economic sanctions.

Long-term effects of sanctions are still unclear
The West has imposed three major economic sanctions against Russia: The first froze assets by Russian elites held in Western banks; the second excluded Russia from the Society for Worldwide Interbank Financial Telecommunication (SWIFT), a messaging system that connects thousands of financial institutions across the globe; the third imposed restrictions upon the Russian Central Bank, effectively financially cutting off Russia from the United States. “SWIFT has sometimes been called the ‘nuclear option,’” Bearce said, noting the move also significantly impacts everyday Russians because it affects almost all financial transactions made in the country. “The exclusion from the SWIFT network is going to have potentially very large effects on Russian society.” Bearce added, however, that research shows sanctions generally aren’t effective, particularly because sanctions also harm the sanctioning country (which is why the United States has seen oil prices skyrocket). But when coupled with other policies, research shows sanctions can be effective. Bearce said an example of this could be if the West heavily arms the Ukrainian opposition, which would draw out the war and further hinder the Russian economy. “If sanctions are going to be effective, this is a really big deal. It’s not just about getting Russia out of Ukraine but also about implications for the Russian State.”

What can Americans do?
Sitting an ocean away can make Americans feel helpless in the war against Ukraine. Panelists offered tips on how the CU Boulder community and the United States at large can help: Distinguish between Putin and the Russians: Do not take this out on the Russian people, many of whom do not agree with the war. Donate to help refugees in the region: Places like Moldova are not rich countries and are receiving an influx of refugees. As of March 1, the U.N. has estimated more than 600,000 have fled Ukraine. Be willing to pay higher gas prices: Sanctions are not going to hurt Russia unless they hurt at home. Call your local representatives and let them know how much this matters to you.”

Conclusion
Some of the major sins of our time in the US is that of apathy, indifference and a lack of empathy and concern about others besides ourselves. As many people in the US and other countries around the world sit in the comfort of their own homes and live in a stable society with intact infrastructure, there are those in Ukraine and other war zones that are fearing for their lives. Individuals and families lost their homes and even entire neighborhoods, as well as their livelihood and way of life in a matter of days, weeks or months. Below we have included resources for families, homeschoolers, and public and private schools that will give teachers and students a much deeper grounding and understanding of the war in Ukraine and some history behind it. Enjoy.