Here’s something you might not know about the demonstrations erupting around Cincinnati in the wake of George Floyd’s murder: many of the organizers are students. A group from Walnut Hills and Mount Notre Dame H.S. led a mass protest outside the Hamilton County Courthouse on June 1; the next day, students from the University of Cincinnati and The Ohio State University took over Uptown with a march of their own.

We know of several more to come (and we’ll keep updating this article as we learn of others): a march starting at 1 p.m. Friday, June 12, at Walnut Hills H.S., organized by the school’s Black Culture Club with Young Activists Coalition; and another starting at the same time Friday in Madison Park, across from Withrow H.S., in the Oakley/Hyde Park neighborhood. There will be a march at 1 p.m. on Saturday, June 13, at 5165 Western Row Road in downtown Mason, planned by a group of Mason H.S. students and recent graduates; and another UC demonstration, 1 p.m. Sunday, June 14, starting at the Clifton Ave. and Probasco intersection Uptown.

Thanks to the reach and immediacy of social media, as well as the “righteous anger” (as one organizer called it) that has long fueled Generation Z’s activism on climate-change, gun violence, LGBTQ equality and other causes, these youth-led demonstrations are growing way beyond organizers’ expectations. Students are even taking center stage at events like the June 4 press conference held by Cincinnati Black United Front and Ohio Justice & Policy Center outside City Hall.

“Today we are all here to dismantle a system that perpetuates unequal employment, unequal education, (and) unequal housing for people of color and black people around this world,” Klarke told told the assembled crowd that Thursday evening. “We are here today because we are tired.” She encouraged young people to vote, not just in November’s Presidential election, but in every race to ensure their voices are heard and to keep public officials accountable for promised reforms.

Klarke also urged Cincinnati Public Schools to ensure equal learning opportunities for all students, and to follow the recent lead of Minneapolis and some other urban districts of no longer relying on local police for discipline and security purposes. “People are afraid to come to school because they feel like targets,” she said 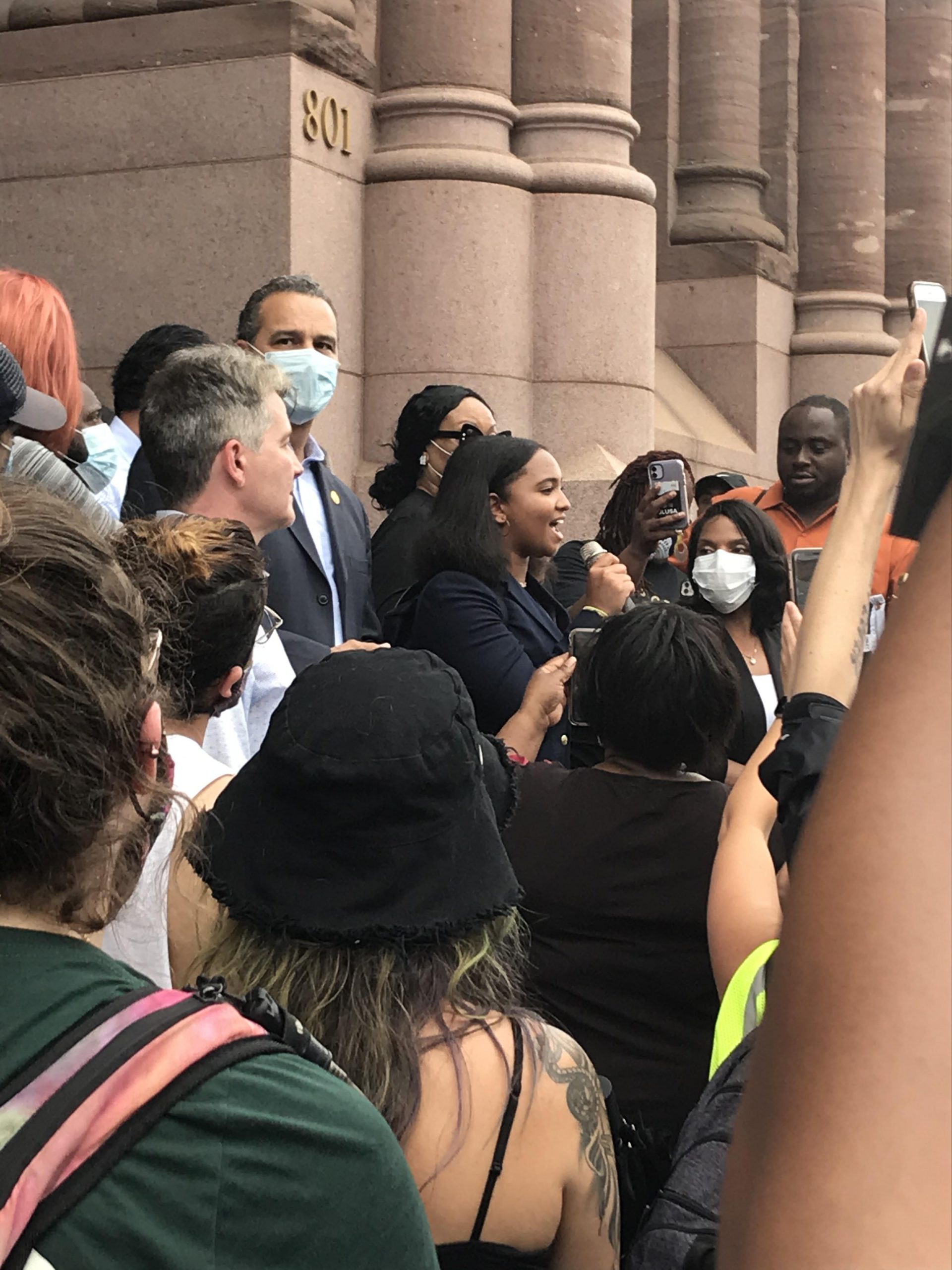 Democracy & Me spoke with Griffith for our “What Does Justice Look Like?” project—you can see the video here—and she was featured on a recent Democracy & Z podcast, with other politically active Walnut Hills students.

“When I see organizers like the ones in my peer group stepping and genuinely giving so much—it gives me hope,” says Ayesha Chaudhry, 16, one of the Mason H.S. students behind the June 13 march. Born in Pakistan, Chaudhry emigrated to the United States with her family at a young age; she credits her AP Government teacher, Ms. Maria Mueller, for igniting her interest in political action, and she thanks her fellow march organizers (four of them African-American, two white) for helping her understand “when my voice is needed, and when my voice is not needed… At the core of this march, it’s about our black brothers and sisters.”

At the same time, Chaudhry says, the strong showing in these protests by white allies and non-black POC, especially compared to past periods of racial unrest, has been a sign of progress for everyone involved: “Us working together—that’s what makes change possible.”

While she respects the anti-police views held by many in the movement, Chaudhry says her group has made participants’ safety a priority, working with Mason authorities on route-planning, accessibility for the disabled, privacy protection for minors, and other issues to ensure a good day of activism for everyone. They’re encouraging those who march to wear masks and maintain some distance, and those who are medically vulnerable to stay home and protest in spirit (or with donations).

“We have to speak out on what’s going on,” she says. “We can’t risk waiting any longer.”

Before you head out to demonstrate, be sure to read WVXU’s Jennifer Merritt’s article on COVID precautions for protesters, and of course, stay up-to-date on and obey all local curfews, pandemic restrictions and advisories, traffic and parking regulations, etc.—you don’t want to get caught up in the criminal justice system while trying to reform it. The Facebook group Cincinnati for Justice has a growing list here of actions/resources related to the cause. And follow Democracy & Me on Twitter for coverage of these and other student protests.