There is much work to be done in the areas of Black studies and African American history. As the title of this article suggests, much of the history has been hidden. Or in the case of the violence in Tulsa, it has intentionally not been included in much of the historical record. May 31, 2021 marked the 100th anniversary of the tragic massacre of Africa Americans in the Greenwood business district in Tulsa Okahoma. We would like to revisit the topic, as we have been seeing more and more awareness brought to the subject in recent times. 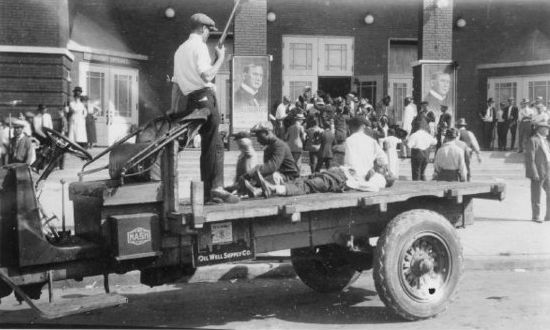 (The Tulsa Historical Society)
A victim of the Tulsa race riot lays on the back of a flat bed truck outside Convention Hall as a white man with a shotgun stands on the truck.

Introduction
History is full of triumphs, innovations and inspirational stories. It is also full of stories and events that consist of heartache, tragedy and pain. A little known historical tragedy that has recently come to light is the Black Wall Street Massacre. The event is also referred to as the Greenwood Massacre, The Tulsa Race Massacre or the Tulsa Race Riot. However the title the “Tulsa Race Riot” is misleading because it suggests that there was mutual aggression between Blacks and Whites, however the term massacre is more fitting and accurate in describing the event.

Resentment of Black Wealth and Affluence
The Black Wall Street Massacre took place on May 31 through June 1, 1921 for over 18 hours, when mobs of White residents attacked black residents and businesses of the Greenwood District in Tulsa, Oklahoma. The Greenwood District was an area of Black affluence known as, Black Wall Street. Greenwood was at that time the wealthiest black community in the United States. The violence was a result of pent up White jealousy and resentment toward the success of the African American business district.

The Massacre and Desecration of Black Dreams
The massacre has been called by experts “the single worst incident of racial violence in American history.” The attacks were carried out both from private aircraft and from the ground, destroying more than 35 square blocks of the Greenwood district. The casualties, injuries and property damage was unconscionable. White citizens were deputized overnight and arrested as many as 6,000 black residents, putting them in makeshift internment facilities for several days. Although the Oklahoma Bureau of Vital Statistics officially recorded deaths at 36, in reality a 2001 state commission examination found that 150–300 deaths had occurred as a result of the massacre. In addition, over 800 people were hospitalized. The violence was began over Memorial Day weekend in 1921 “when 19-year-old Dick Rowland, a black shoe shiner, was accused of assaulting Sarah Page, a 17-year-old white elevator operator of the nearby Drexel Building.” Rowland was arrested and taken into custody. There was talk that the young man would be lynched. In order to protect Rowland a group of 75 armed black men descended upon the jail to stop a white mob from trying to lynch him, which triggered the violence. 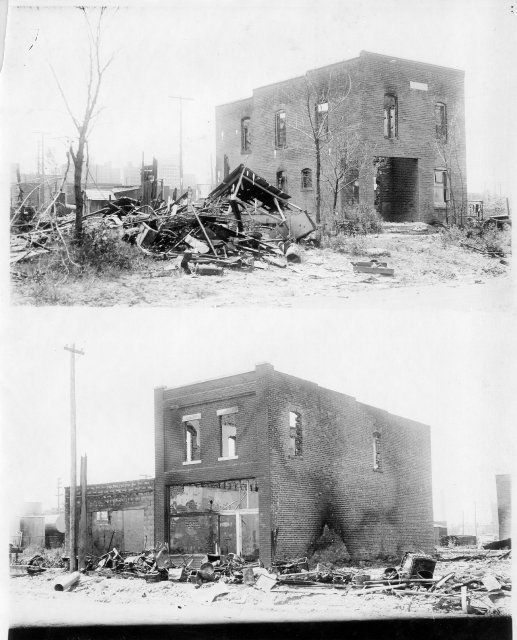 The Damage and No Justice for Black Citizens
White rioters wreaked havoc upon the black neighborhood that night and morning killing African Americans and burning and looting stores, other businesses and homes. The violence was only staved when around noon the next day Oklahoma National Guard troops managed to “get control of the situation by declaring martial law. About 10,000 black people were left homeless, and property damage amounted to more than $1.5 million in real estate and $750,000 in personal property (equivalent to $32.25 million in 2019). Their property was never recovered nor were they compensated for it. Many survivors left Tulsa, while black and white residents who stayed in the city were silent for decades about the terror, violence, and losses of the event. The massacre was largely omitted from local, state, and national histories.”

A Graphic Portrayal of the Event in the Atlantic
The Atlantic recently created a graphic novel to detail the events in both word and picture form. See their illustrated portrayal of the event here. For more details of this historical tragedy check out the history channel’s article entitled the Tulsa Race Massacre.