Introduction
One of the hallmarks of a democratic society is the idea of cultural diversity. This involves diverse customs and ways of life including language, foods, dress, the arts and religious traditions. Cultural pluralism is one of the important parts of a successful democracy.

The Christmas season in the United States has been influenced by and is a result of a culmination of various traditions that have come to shape how we know it today. The overarching theme of Christmas is the celebration of the birth of Christ and is one of the Christian high holidays. But even among Christians there are various traditions implemented to commemorate the birth of Christ. But the celebration of Christmas has a mixture of pre-Christian, Christian and secular traditions.

Popular modern customs of the Christmas holiday include gift giving, completing an Advent calendar or Advent wreath, Christmas music and caroling, lighting a Christingle, viewing a Nativity play, an exchange of Christmas cards, church services, a special meal, pulling Christmas crackers and the display of various Christmas decorations, including Christmas trees, Christmas lights, nativity scenes, garlands, wreaths, mistletoes, and holly. This article will highlight some of the major Christmas traditions and their history. 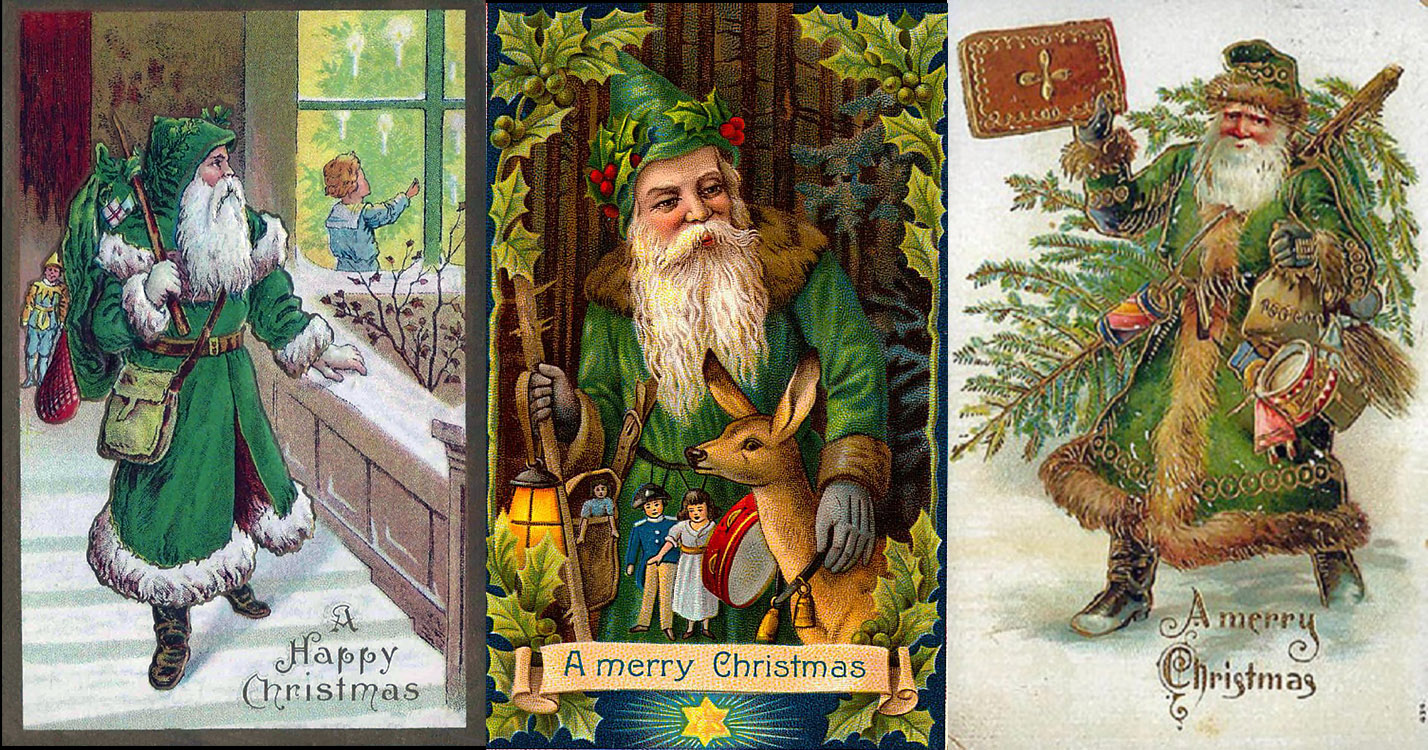 Advent Season
Advent season is observed in many Christian denominations, throughout the world. It is both a time of expectant waiting for the celebration of Christ’s birth at Christmas and the anticipation of of Christ’s return to the earth, also known as the second coming.

The origins of the Advent tradition during the Christmas season is not fully known. Historians do know that it existed in 480 AD, as there are historical records that highlight the tradition.  It was also mandated by the council of Tours of 567 to have monks fast every day in the month of December until Christmas. This was known as the Nativity Fast or the Fast of December.

Advent is the beginning of the Western liturgical year. In several Christian denominations (I.e. the Roman Rite of the Catholic Church, the Anglican and the Presbyterian Churches, Advent commences on the fourth Sunday before Christmas—the Sunday nearest to St. Andrew’s Day (30 November).

Practices associated with Advent include keeping an Advent calendar, lighting an Advent wreath, praying an Advent daily devotional, four consecutive Advent Church services, erecting a Christmas tree or a Chrismon tree, lighting a Christingle, as well as other ways of preparing for Christmas, such as setting up Christmas decorations, a custom that is sometimes done liturgically through a hanging of the greens ceremony.

Yuletide
Yule or Yuletide (“Yule time”) is a festival observed by the historical Germanic peoples. Scholars have connected the celebration to the Wild Hunt, the god Odin, and the pagan Anglo-Saxon Mōdraniht. It later underwent Christianized reformulation resulting in the term Christmastide. Terms with an etymological equivalent to Yule are used in the Nordic countries for Christmas with its religious rites, but also for the holidays of this season. Today Yule is also used to a lesser extent in the English-speaking world as a synonym for Christmas. Present-day Christmas customs and traditions such as the Yule log, Yule goat, Yule boar, Yule singing, and others stem from pagan Yule. Today the event is celebrated in Heathenry and some other forms of Modern Paganism.

Santa Claus
In addition, several closely related and often interchangeable figures, known as Santa Claus, Father Christmas, Saint Nicholas, and Christkind, are associated with bringing gifts to children during the Christmas season and have their own body of traditions and lore.

Father Christmas dates back as far as 16th century in England during the reign of Henry VIII, when he was pictured as a large man in green or scarlet robes lined with fur. He typified the spirit of good cheer at Christmas, bringing peace, joy, good food and wine and revelry. As England no longer kept the feast day of Saint Nicholas on 6 December, the Father Christmas celebration was moved to the 25th of December to coincide with Christmas Day. The Victorian revival of Christmas included Father Christmas as the emblem of ‘good cheer’. His physical appearance was variable, with one famous image being John Leech’s illustration of the “Ghost of Christmas Present” in Charles Dickens’s festive classic A Christmas Carol (1843), as a great genial man in a green coat lined with fur who takes Scrooge through the bustling streets of London on the current Christmas morning, sprinkling the essence of Christmas onto the happy populace.

In the Netherlands and Belgium the character of Santa Claus has to compete with that of Sinterklaas, Santa’s presumed progenitor. Santa Claus is known as de Kerstman in Dutch (“the Christmas man”) and Père Noël (“Father Christmas”) in French. But for children in the Netherlands Sinterklaas remains the predominant gift-giver in December; 36% of the Dutch only give presents on Sinterklaas evening or the day itself (December 6, whereas Christmas (December 25) is used by another 21% to give presents. Some 26% of the Dutch population gives presents on both days. In Belgium, Sinterklaas day presents are offered exclusively to children, whereas on Christmas Day, all ages may receive presents. Sinterklaas’ assistants are called “Zwarte Pieten” (in Dutch, “Pères Fouettard” in French), so they are not elves. In Switzerland, Pères Fouettard accompanies Père Noël in the French speaking region, while the sinister Schmutzli accompanies Samichlaus in the Swiss German region. Schmutzli carries a twig broom to spank the naughty children.

With the Christianization of Germanic Europe, numerous traditions were absorbed from Yuletide celebrations into modern Christmas. During this period, supernatural and ghostly occurrences were said to increase in frequency, such as the Wild Hunt, a ghostly procession through the sky. The leader of the wild hunt is frequently attested as the god Wodan (Norse Odin), bearing (among many names) the names Jólnir, meaning “Yule figure”, and Langbarðr, meaning “long-beard”, in Old Norse. Wodan’s role during the Yuletide period has been theorized as having influenced concepts of St. Nicholas in a variety of facets, including his long white beard and his gray horse for nightly rides (compare Odin’s horse Sleipnir) or his reindeer in North American tradition. The appearance of Santa Claus or Father Christmas, whose day is the 25th of December, owes much to Odin, the old blue-hooded, cloaked, white-bearded gift bringer of the north, who rode the midwinter sky on his eight-footed steed Sleipnir, visiting his people with gifts. Odin, transformed into Father Christmas, then Santa Claus, prospered with St Nicholas and the Christ child and became a leading player on the Christmas stage.

Krampus is a horned, anthropomorphic figure described as “half-goat, half-demon”, who, during the Christmas season, punishes children who have misbehaved, in contrast with Saint Nicholas, who rewards the well-behaved with gifts. Krampus is one of the companions of Saint Nicholas in several regions including Austria, Bavaria, Croatia, Czech Republic, Hungary, Northern Italy including South Tyrol and the Province of Trento, Slovakia, and Slovenia.[ The origin of the figure is unclear; some folklorists and anthropologists have postulated it as having pre-Christian origins. In traditional parades and in such events as the Krampuslauf, young men dressed as Krampus to celebrate the holiday. Krampus is featured on holiday greeting cards called Krampuskarten.

Krampusnacht The Feast of St. Nicholas is celebrated in parts of Europe on 6 December. On the preceding evening of 5 December, Krampus Night or Krampusnacht, the wicked hairy devil appears on the streets. Sometimes accompanying St. Nicholas and sometimes on his own, Krampus visits homes and businesses. The Saint usually appears in the Eastern Rite vestments of a bishop, and he carries a golden ceremonial staff. Unlike North American versions of Santa Claus, in these celebrations Saint Nicholas concerns himself only with the good children, while Krampus is responsible for the bad. Nicholas dispenses gifts, while Krampus supplies coal and the Ruten bundles.

Saturnalia
Saturnalia was an ancient Roman festival in honour of the god Saturn, held on 17 December of the Julian calendar and later expanded with festivities through to 23 December. The holiday was celebrated with a sacrifice at the Temple of Saturn, in the Roman Forum, and a public banquet, followed by private gift-giving, continual partying, and a carnival atmosphere that overturned Roman social norms: gambling was permitted, and masters provided table service for their slaves. A common custom was the election of a “King of the Saturnalia”, who would give orders to people and preside over the merrymaking. The gifts exchanged were usually gag gifts or small figurines made of wax or pottery known as sigillaria. The poet Catullus called it “the best of days”. Saturnalia was the Roman equivalent to the earlier Greek holiday of Kronia, which was celebrated during the Attic month of Hekatombaion in late midsummer. It held theological importance for some Romans, who saw it as a restoration of the ancient Golden Age, when the world was ruled by Saturn. The Neoplatonist philosopher Porphyry interpreted the freedom associated with Saturnalia as symbolizing the “freeing of souls into immortality”. Saturnalia may have influenced some of the customs associated with later celebrations in western Europe occurring in midwinter, particularly traditions associated with Christmas, the Feast of the Holy Innocents, and Epiphany. In particular, the historical western European Christmas custom of electing a “Lord of Misrule” may have its roots in Saturnalia celebrations.

Conclusion
As can be observed from the information above, Christmas in the twenty-first century is a mixture of various cultures that has helped shaped how we think of the holiday season today. Another hallmark of a democratic society is cultural plurality and the cultural exchange and interplay. Below are resources and lesson plans social studies teachers can utilize to teach about the history of Christmas and the various religious traditions and folklore that have influenced the season.

Unwrapping the history of Christmas
https://www.tes.com/teaching-resources/blog/unwrapping-history-christmas